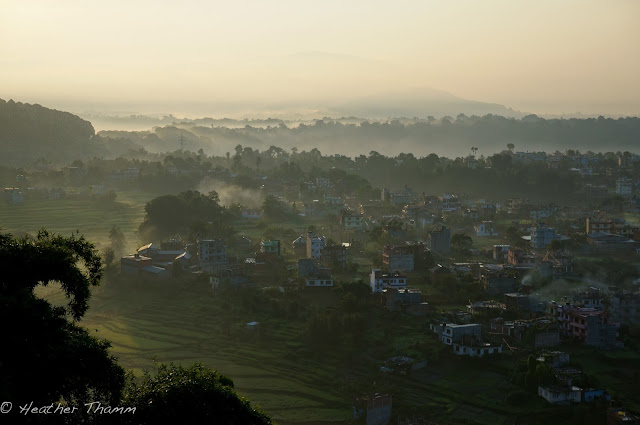 A sunrise view taken from Kopan Monastery overlooking one of the many villages along the edge of Kathmandu. 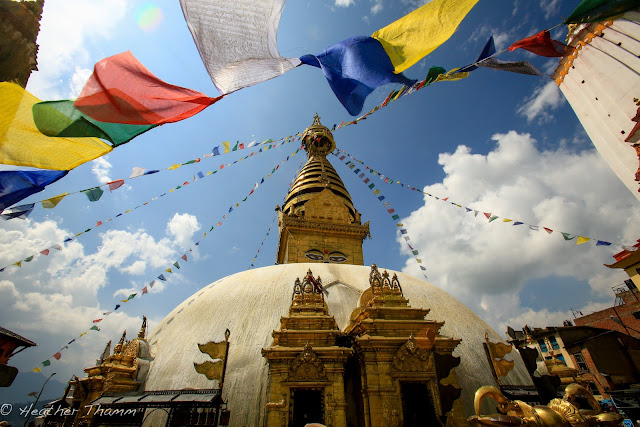 The famous Monkey Temple, Swayambhunath... although I didn't see many monkeys upon my visit. 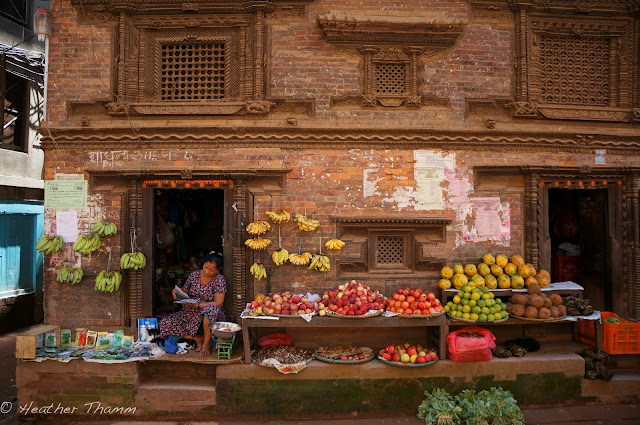 A colorful fruit stand on the streets of Bhaktapur. 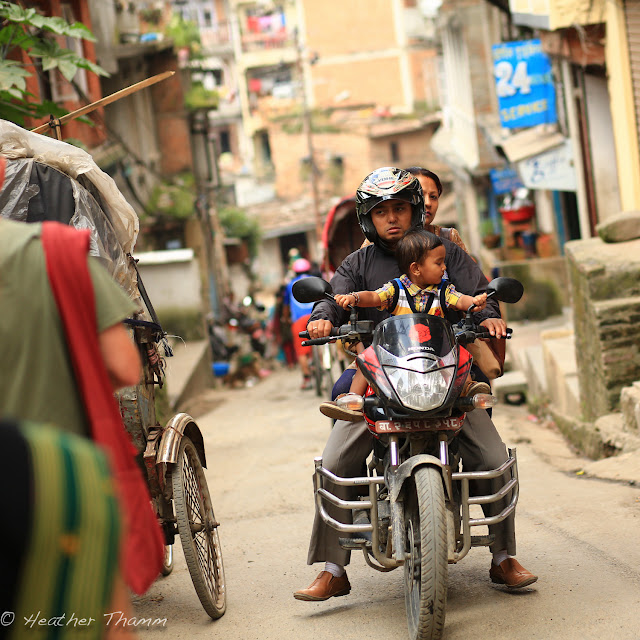 I kept noticing only the driver wearing a helmet. Apparently its the law, but passengers aren't required. Interesting... 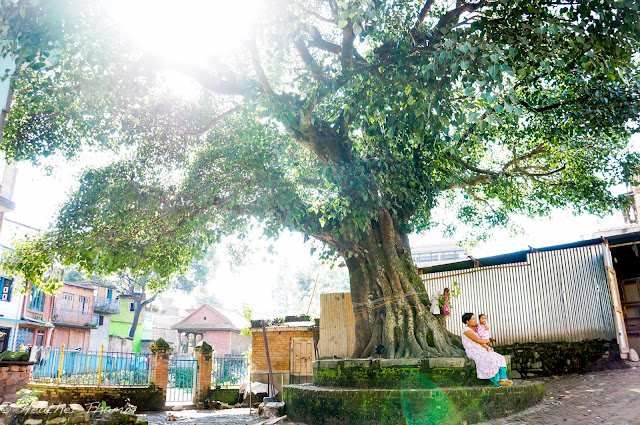 Mother and child sitting under a Bodhi tree 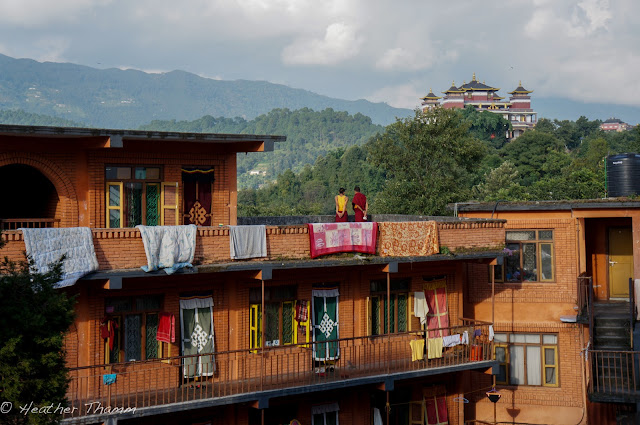 View from Kopan looking over at another Monastery. I couldn't find anyone to share the story or name of the neighboring monastery. Apparently they're not affiliated with each other. 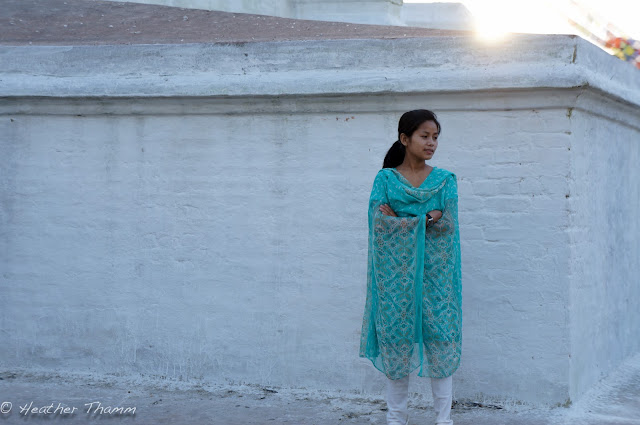 One of my sneaky street photography moments with my new little Sony NEX 5 mirrorless camera. 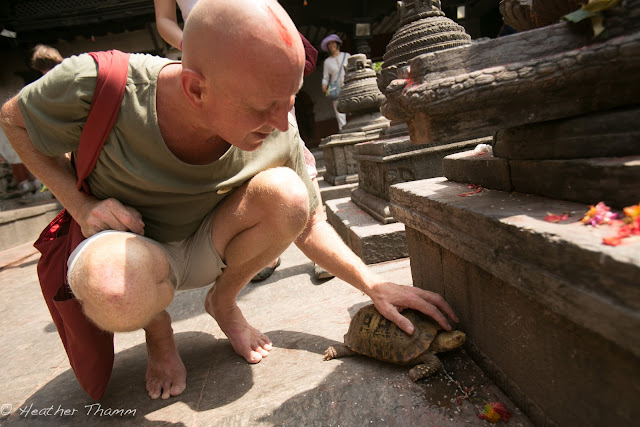 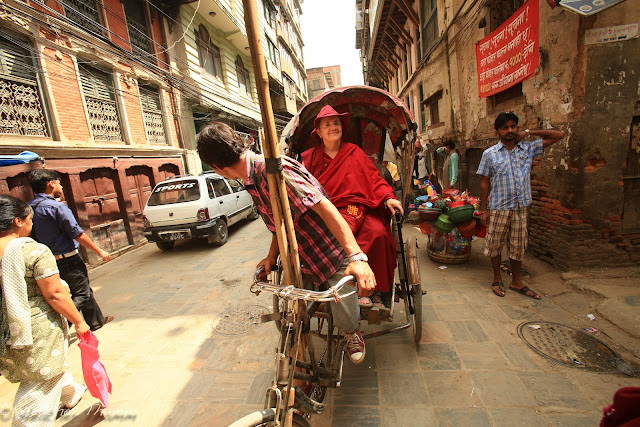 David rented a rickshaw for Choyni as we ventured around Thamel visiting some of Kathmandu's most hidden Buddhist and Hindu sites. 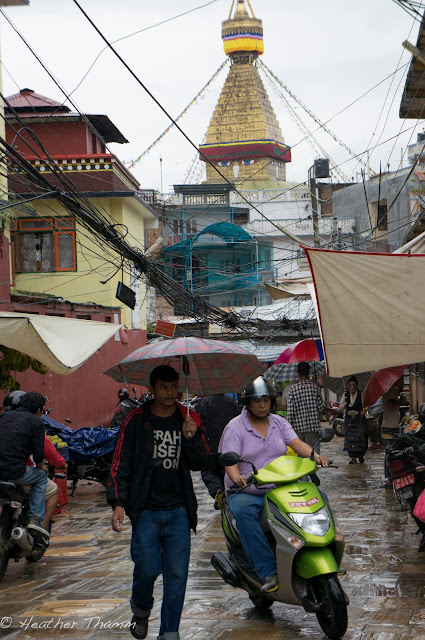 Culture shock on my first morning in Kathmandu. I was completely overwhelmed just walking from my guest house to Bodhnath Stupa. 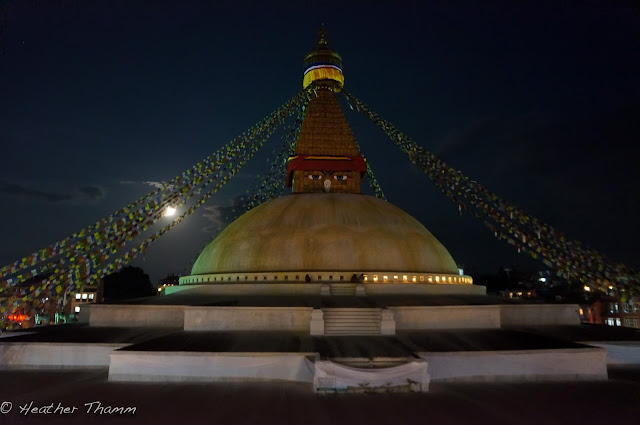 Bodhnath Stupa at night. The place is so peacefully sleepy, minus the barking dogs.

Kathmandu is a city planners worst nightmare. The streets are a labyrinth of narrow passage ways winding without any obvious reason into neighborhoods of cement shops and backyard rice patties. There are no streets signs, speed limits or traffic lights. Motorcycles and taxis weave erratically through mobs of people and stray dogs, and only the tourists seem to be bothered by what looks like a near miss around every corner. Power lines hang just above head height in a tangled web of cords. The city's strategy to conserve power is an eight hour daily power outage. Despite what appears to be complete madness, Kathmandu is actually quite peaceful.

My first day in Kathmandu I arrived at Kopan Monastery for a Buddhist retreat. I was completely jet lagged and fell asleep only to wake up just before dinner. I ran into my teacher, Choyni Taylor, in the bathroom. She had just arrived from Australia with her 16 year old granddaughter, Grace. I was immediately struck by Choyni's honestly and wit as she described in detail her first experience with a squat toilet overflowing with 'shit.' I remember thinking Wow! Buddhist nun's say shit. I think I'm going to like this place. At breakfast the following morning one of the monks drew me a map from Kopan to Bodhnath (Buddhist Stupa) and then to Pashuptinath (Hindu temple.) Our course didn't start until 5pm, so I asked Choyni, pronounced "journey" if it was okay to take Grace along with me. We only got lost four or five times before we realized it was better to ask the locals rather than rely on the accuracy of the squiggly lines. What we discovered was how friendly and eager everyone was to help.

Kopan Gompa(as the locals call it) is located up on a hill overlooking the massive smoggy city. It was built in the 1970's by two Tibetan Lama's, Lama Thubeten Yeshe and Lama Zopa Rinpoche. Over the years Kopan has grown into a large Monastery/Nunnary with close to 700 monks and nuns. Throughout the year they offer retreats to westerners as a way to support the school and to help share their wisdom of love and compassion to foreigners.

My two weeks at Kopan were absolutely magical. How often do complete strangers from all over the world sit down in one place to meditate on compassion towards themselves and others? Some of us were there for our first time at a Buddhist retreat, others had been studying for 20 + years. Many of us were there to specifically address our negative emotions and to focus on addictive behaviors or traumatic events. Choyni with her background as a psychologist was able to explain complex Buddhist philosophy and relate it to western psychology in a way that resonated with everyone. Our discussions ranged from looking at the root causes of our own personal suffering to learning how to practice equanimity in life's many challenging circumstances. Equanimity is the ability to be aware of a negative emotion as it arises and not let that emotion take control. The key is self awareness and the challenge is to apply love and compassion to those who annoy the hell out of us.

Although I did not achieve enlightenment, I did have one major attitude realization; to view all problems as an opportunity to learn about myself rather than to blame the problem on someone else. I find this to be common for me, especially at work. I often get caught up in my ideals, battling my way through what I perceive to be poor communication/company vision. The result: anger, frustration and disappointment. What I realized is... if I just get upset, the problem doesn't improve, it only gets worse. And that's how Karma works. Just like a bad habit, Karma has a way of slapping us in the face to wake us up to our own negative energy.